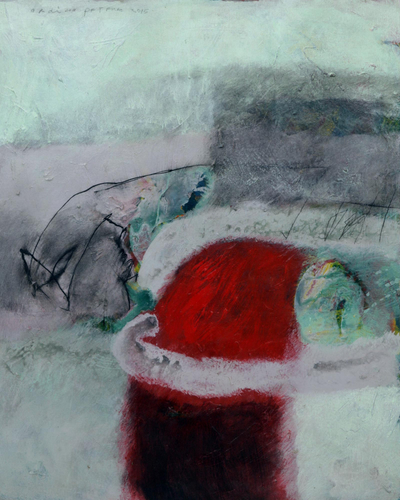 A crimson monolith arises amid soft clouds of grey and aqua. They swirl gently around the fiery pillar, caressing its ardent surface. "I am obsessed with the concept of power," Made Ardika muses. "I use red here to express its force. It stands out against the calmer colors that surround it." The Balinese artist works in acrylics on canvas to create the dramatic painting.

"I love to travel and see beautiful scenery. I use my vision as camera; I keep the images in my mind, and later on interpret them with my paintbrush."

Given the name of Made Ardika by his parents, the artist is better known to his friends as Petruk. Art has been part of his life since he was little when he loved to draw and take part in competitions. A childhood hobby has now become his professional career as a painter.

"To support my painting hobby, I undertook formal studies at the SMSR secondary school of art and continued to the STSI art university. Together with several friends from two different universities, we established a painter group called Galang Kangin, which are Balinese words meaning 'bright in the east.' In relatively short time, Galang Kangin has become one of the better known painter groups in Bali and has participated in exhibitions in many different places.

"Other than painting, when I was teenager I also learned how to make wood and stone carvings, to sing traditional Balinese songs, and I even sing in a band. However being a painter gives me a special satisfaction for myself. I love to travel and see beautiful scenery. I use my vision as camera; I keep the images in my mind, and later on interpret them with my paintbrush.

"In 2003, I met a woman named Made Kurniati Andika, who is also a painter. That the same year we got married and we now have a handsome son.

"I have a story to share. As I mentioned, since I was a little boy I've taken part in drawing competitions. One day in the competition, when the other children were still busy with their drawings, I finished mine very quickly and many people at that time considered it quite nice. But then a problem occurred when I had to write the title of the drawing and sign my name. At the time, I knew how to draw but still didn't know how to write."

Ardida has exhibited his work throughout Indonesia.