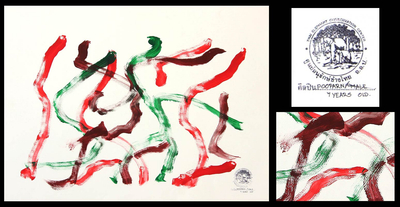 Broad strokes of red and green evoke the Christmas season. Grasping the brush with his trunk, Pooparn paints an exuberant abstract that expresses his cheerful spirit. The young Thai elephant artist shows a preference for bright, clear colors.

The reverse side of this original painting features the Elephant Conservation Center's seal of authenticity, as well as Pooparn's biographical information. It arrives unframed.

You can find our elephant painting 'Christmastime' by Pooparn in paintings categories such as Elephant Art Paintings and Acrylic Paintings. Enjoy exploring these sections for other Novica treasures.

In addition to painting, Pooparn plays a role in the courtyard show, dragging a single timber and playing the angklung — a traditional Thai instrument resembling a bamboo xylophone.

Seedaw Pooparn used to walk on the hot paved roads, in danger of being hit by a car or truck. The Fon Yad Diew Foundation (Rain Drop Foundation) purchased this young male from his owner but they lacked a mahout to take care of him. So on November 11, 2008, Pooparn was adopted by the Thai Elephant Conservative Center.

The cheerful pachyderm likes to wag his ears and dance back and forth; his favorite foods are corn and watermelon. His tusks are quite small and can be seen peeking out at the corners of his mouth. His name derives from the Phu Phan Ratchaniwet Palace in Sakon Nakhon province.

In addition to his painting skills, Pooparn plays a role in the courtyard show, dragging a single timber and playing the angklung — a traditional Thai instrument crafted of bamboo and resembling a xylophone.

In 2002, Novica offered to assist Richard Lair by featuring the Asian elephants' paintings online, making them more accessible to the general public. Since then, a new wave of media attention has again focused on the plight of the Asian elephant, and thousand more people have purchased paintings — helping raise considerable funds for the TECC in Thailand, and for a separate rescue center in Bali.