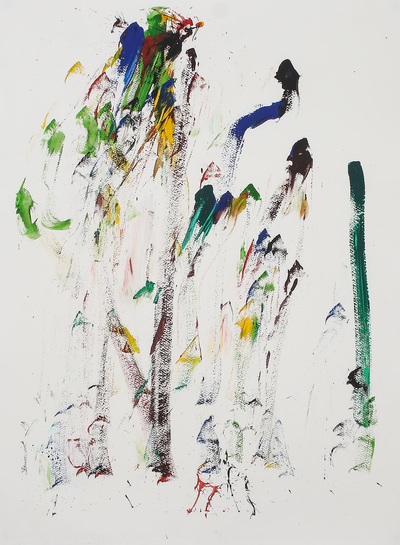 bySingha
Holding a paintbrush carefully with her trunk, Singha the elephant from Thailand... more

Holding a paintbrush carefully with her trunk, Singha the elephant from Thailand paints this impressive composition. Abstract lines with dotted patterns decorate the paper in this lovely painting.

Singha is a male Thai elephant with no tusks. His paintings are abstract and expressive, with slender lines that seem to add motion and activity to the composition.

Singha is a male Thai elephant with no tusks. He was born in August, 2001, to Jojo and Umphang, who are both featured elephant artists.

His character is playful and naughty, and when he is away from his mahout, he can be very stubborn. With his mahout, however, he is the calmest and most serene of elephants. His agreeable and cooperative disposition made it easy for his mahout to teach him painting in only about two weeks' time.

Singha is very intelligent. He is one of the elephant school show members on the demonstration field who can carry out basic commands and body movements, and can act as the child of other female elephants. His training to learn other commands continues.

His paintings are abstract and expressive, with slender lines that seem to add motion and activity to the composition. He applies different pressures when painting, so that some lines are loosely sketched and airy, while others are bold and dark.

Interestingly, the TECC is also home to the Thai Elephant Orchestra, the world's first elephant orchestra and the first orchestra in which animals play instruments (as opposed to their own song) with "serious musical intent." The Thai Elephant Orchestra, under the direction of Richard Lair and Dave Solder, has produced three fundraising CDs, available through Amazon.

Novica asked Lair about the legitimacy of a much-talked-about 2008 elephant "self portrait" (the making of which, at a different Thai elephant camp, was captured on video). Lair explained that the elephant's mahout (handler) clearly directed the painting, standing just off-camera, holding the elephant's tush (small, sensitive tusk) to carefully guide the elephant's trunk in precise flourishes, creating the sensational results.
View all