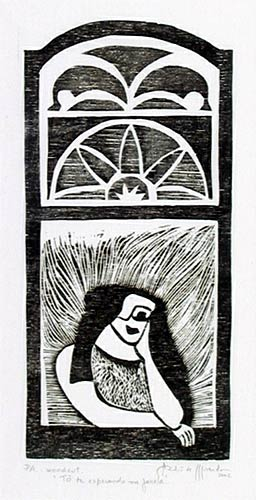 Artwork, "Waiting for You at the Window"

A woman sees the world pass by absorbed in curious expectation, leaning out of a... more

A woman sees the world pass by absorbed in curious expectation, leaning out of a window of ancestral design. André de Miranda seeks to capture the charm of Brazil's ancient architecture, when doors and windows featured polychrome fanlights. In this xylograph de Miranda combines the strict formality of construction with the ephemeral power of a smile.

Executed on Japanese paper with offset ink, this xylograph print was originally featured in the book "Bandeiras de Portas e Janelas do Brasil no Século XIX," ("Fanlights of Doors and Windows of Brazil in the XIX Century") by Tilde Canti (1983). De Miranda makes available prints four and five from a limited edition of five.

You can find 'waiting for You at the Window' by Andre de Miranda in paintings categories such as Print Paintings. Enjoy exploring these sections for other Novica treasures.

"I was lucky enough to learn by frequenting great workshops with the best engravers in Brazil."

"I don't carve with force, I excavate with fury. The art of the xylograph is fury. Different from painting, which is realized using a brush that slides across the canvas, the xylo is a naturally violent technique that is executed through subtraction. Tree bark ripped from the matrix originating the negative tracery that will be the impression on the paper. Each original xylograph carries with it the vestiges of this violence, which can't be hidden. It is there that the tool employed is seen, scars that appear in my work.

"The technique of xylographs - in Greek 'xylo' means wood - results from direct manual incision into the wood, utilizing implements like gouges, knives, and chisels. Each implement corresponds to a type of furrow left in the wood. It is a technique that allows for surprises - opposed to painting, which materializes little by little, in engraving one only knows what has been made at the end of the process.

"Almost all artists pass through a phase of engraving, but very few remain faithful to this art. I've been making engravings since 1976; I was lucky enough to learn by frequenting great workshops with the best engravers in Brazil. The xylograph is an expression very characteristic of Brazil. It is a simple and cheap way of reproducing images, which has been used since the 9th Century in the Orient, and was officially brought to Brazil with the royal press at the beginning of the 19th Century. But already in the 16th Century, the time of the discovery of our territory, the Kaiapo people had employed the principals of xylographs, using wooden stamps, upon whose surface were engraved designs to be stamped on the skin to adorn themselves for festivals and rituals. But it was in the 1930s that xylo arrived on the national scene due to the hands of the artist Goeldi. Among popular arts, the xylograph is the traditional illustration of the little pamphlets of poetry, popular poems sold in the streets that tell of life in the northeast.
br> "My work is inspired by diverse themes; everything is a pretext for an artist to create. I am a teacher of this technique and I always say to my students that engraving is not a stamp; each one is different from the next. I think that Novica is great because it allows more people to come into contact with the work of each artist. I am happy to see my work exhibited for everybody."

Thank you, Andre. I have just received ""Garden of a Star"" and we all love it. It is strong and full of good energy. How can a piece so vibrant also be so balanced? We hope to buy another work of art from you soon!

Dear Andre: I received your beautiful ""Roma"". Pomegranate! It is wonderful and I am very happy to have it my home!! Obrigada! Gayane