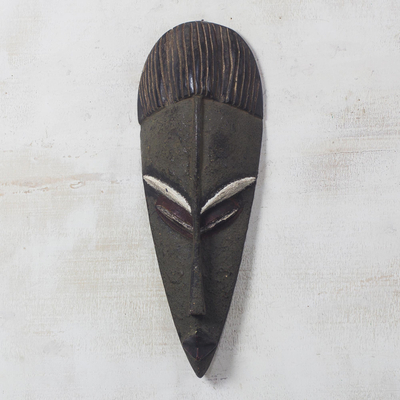 Artisan Ralph Kwasi Agudze of Ghana presents an original mask design with a stern visage. The mask is hand-carved from native sese wood and give a distressed brown and red finish. The artisan names his creation norvienyo, which means "good brother" in the Ewe Language.

i bought two chairs, although the production was of different years, still the craftsmanship was skillful some color variation though. but, overall the product was neatly crafted, packed and delivered local customs are a big headache though, costing quite a lot

"My wife loves her mask"

The craftsmanship of the carver is exquisite and far exceeded my expectations. There is another mask in our future

I purchased this hand-carved djembe drum which is both a work of art and an amazing musical instrument. My daughter lived in Ghana in a village called Xavi for two years. When we visited we were part of a celebration that included drumming and dancing. I am thrilled to have a drum of my own to bring to a local drum circle. The artist said that in making the drum he thought only of making people smile. He has succeeded. I am smiling and hope to share the joy. Thank you.

The mask is wonderful, but it arrived with a chip on the face. I can repair it, but it is sad to see such a nice work arriving damaged.

Great artist and mask. Love it

You can find our african wood mask 'Norvienyo' by Ralph Kwasi Agudze in masks categories such as Cultural Masks, Ghanaian Masks, Rustic Masks and Wood Masks. Enjoy exploring these sections for other Novica treasures.

Ralph financially supports two of his children who are attending the university.

Ralph Kwasi Agudze has received 6 microcredit loans with 0% interest from Kiva and Novica, the first for $100 and the most recent for $300.

"I was so determined to make it, it took me just a few months to learn carving and I discovered a surprising natural ability."

Ralph Kwasi Agudze was born on January 8, 1955 in the Volta region of Ghana. He attended a Roman Catholic primary school and then went on to his secondary schooling. "Since childhood, beginning at the age of ten, I was interested in arts," he says. Upon completing his middle school education, he gained employment at a textile company as a weaver between 1973 and 1995. During this period, he furthered his education by registering with the Institute of Adult Education.

In 1995, the company had to lay off some of its workers, which affected Agudze so he decided to move and learn a trade of his own. He was encouraged to pursue art by William Amede, a Contracting Project Surveyor. "I was so determined to make it, it took me just a few months to learn carving and I discovered a surprising natural ability," Agudze recalls. He then established a woodcarving business. He uses files, chisels, vices, hammers, and usually prefers ebony or tick wood, depending on the kind of work he has in mind.

Agudze is married with two children, a son and a daughter, who are seriously engaged in their studies.
View all