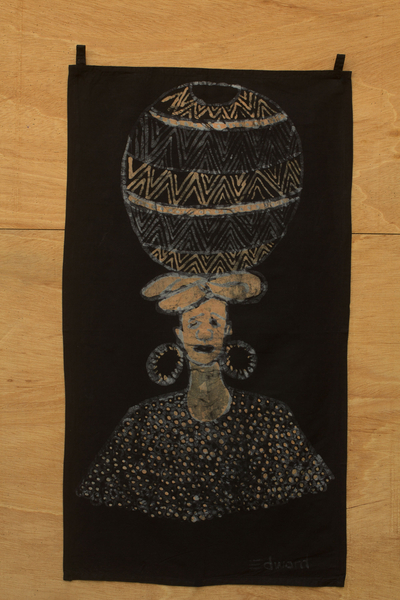 Dressed in her best, a girl carries a calabash on her head. Edward Adeniran creates a batik wall hanging of radiant beauty, depicting a teen at the threshold of adulthood. "When a girl is born into kinship and she grows up, she must be initiated into womanhood by carrying the jewelry that her parents gave her to the venue of the ceremony. This is mainly practiced by the Yoruba tribe in the Western part of Nigeria," the Ghanaian artisan explains.

You can find our batik wall hanging 'Initiation into Womanhood' by Edward Adeniran in wall decor categories such as Batik Wall Hangings and Cotton Wall Hangings. Enjoy exploring these sections for other Novica treasures.

Edward Adeniran has received a $200 microcredit loan with 0% interest.

"I began drawing at a very tender age, whatever I set my eyes on."

“Indeed, NOVICA has been my love at first sight.

“Twenty years ago I joined this prestigious company full of opportunities. In the beginning, I struggled a lot with my replenishment and with cracks in my paintings. I came to realize that NOVICA is an institution that seeks not only to sell my products but also to train me as to how to come up with designs and better ways of improving on the quality of my works. With time, the local team here in Ghana guided me as to how to replenishment my pieces and to avoid cracks in my work. I must say it wasn’t easy at all. For a long time I stopped replenishing my stock and started producing my designs as unique pieces.With the knowledge I acquired on replenishment now I have started replenishing my stock. NOVICA has also taught me how to work with ease better than in the beginning. I have also found a better way of priming my canvas to avoid cracks. Another improvement I have seen is in the speed with which I work.

“Initially I was based in Nigeria, but with time I have been able to move to Ghana with my business. I have been able to widen my scope with the number of people I have taught. I have taught over a 100 pupils. Aside from the pupils I have trained, I have also trained my daughter Cecilia and son Bright, as well as my wife, Oluwayemisi, who are all now working with NOVICA. I also train students from various secondary schools offering art. Specifically, I teach batik tie-dye techniques.

“NOVICA has greatly affected my life. Aside from the pride of being part of such a prestigious group, it has also helped me attain certain goals. An example of one is my present accommodation, which was a result of the funds I received from selling my products with NOVICA.

“19 years ago, I received a letter of recognition for being the best-selling wall hanging artisan and for my intense involvement in the art business as well as my ability to impact knowledge. My way of giving back to NOVICA is introduce more artisans for those artisans to also have a feel of the fruits of NOVICA. My goal is to introduce artisans from the sub-regions, such as Togo, Nigeria, Ghana and Burkina Faso.”

"Born to a Ghanaian mother and a Nigerian father on November 16, 1967, I began drawing at a very tender age, whatever I set my eyes on. What I fancied most, however, was copying pictures of historical figures like Sir Charles MacLean, Guggisberg, and Macarthy, which I found in the history book. Fine Arts was one of the subjects I sat for at the Ordinary Level (middle school) in 1979. Between 1988 and 1990, I sat for the Ordinary National Diploma (OND) and for the Higher National Diploma (HND) in 1995 at the Polytechnic University. I specialized in painting with textile as a subsidiary."
View all