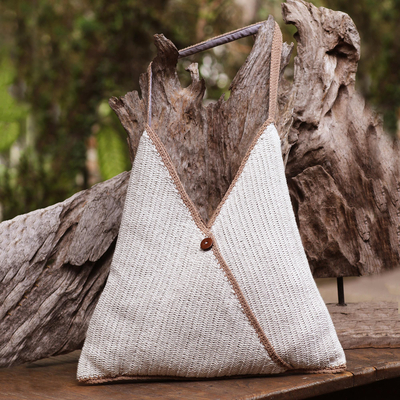 "I wear this almost daily"

For me this is the perfect everyday necklace to wear with almost any outfit. A true work horse. It is beautiful and high quality. I m very happy with it.

This bracelet was in my wish list the moment I saw it and I splurged on it for my Novica anniversary. It is truly beautiful, however I struggled a lot with the catch to be able to put it on by myself. First, the round clasp is small and hard to work with. Second, there is no usual flat, round ring on the other end of the bracelet that would give me half a chance in catching it with the clasp. Instead that end has only the short chain with wavy links as shown in the pictures. I was really disappointed; I had admired it since it first came out. Looking more closely at the pictures I can see that this is the way the bracelet was constructed. I do not like the thought of giving it up and returning it, so my only option is to have a jeweler re-work the ends with an easier clasp system. I hope the artists can consider this for future designs. The bracelet is wearable just as it is, but I will need help to put it on as it is way too frustrating by myself. As far as beauty it gets five stars.

You can find our cotton shoulder bag 'Japan Style' by Nengah Sudarma and Kayoko in handbags categories such as Cotton Handbags and Shoulder Bags Handbags. Enjoy exploring these sections for other Novica treasures.

“We are Nengah Sudarma and Kayoko, a married couple who met in 1999 in Ubud, Bali. I am Nengah Sudarma, and I was born in Tejakula, a small village near beaches that is famous for the Wayang Wong dance, a puppet show with people as the puppets. Kayoko, my wife, was born in Japan, and she used to work as design interior. After our marriage, we were blessed with a son.

“We are interested in developing our jewelry designs and handbag designs. The bags are made with a knitting process, and Kayoko is really interested in learning about knitting. One day when we were walking around a village in Bali, we saw a bunch of mothers who were knitting while taking care of their children. At that time our son was just a year and a half. We were so happy at that time because we were witnessing something awesome. Mothers, with their responsibility of taking care their children, were able to work and make such beautiful knitting.

“We approached them and Kayoko talked about her designs, which for her were complicated designs, and yet the mothers said they could make something like that. That was our first time working with them. Kayoko is responsible for the designs and I am responsible to get quality materials and tools. Together we started the business, and it turned out beautifully.

“After the bags were done, Kayoko and I were inspired by the bags to make silver jewelry that could match the bags, were good for daily use, and had cultural accents to show its origins. And we also decided to plate some of them in gold, for an elegant look without compromising the designs.

“A friend told us about NOVICA, and said that NOVICA could help us to promote our works. We are so glad that our designs are matching with NOVICA, and that one of our visions fit with NOVICA as well--helping neighborhood women get income from what they can do best while still taking care of their children. I hope we can work together with NOVICA alongside our neighborhood, to create a better life for us all.”
View all