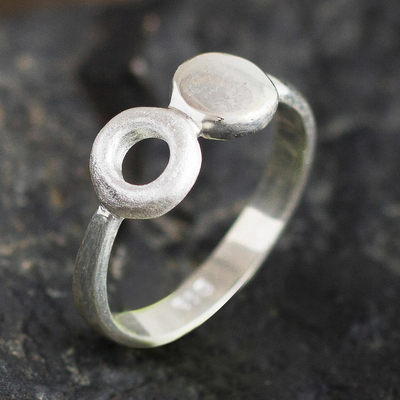 Contemporary chic describes this pretty band ring from Peruvian artisan Dario Alejandro Vela. The ring is crafted of Andean 950 silver with a combination of polished and brushed finishes.

"This is my go to bracelet!"

I love this bracelet, it has presence, I get compliments on it every time I wear it, and I work in a Jewelry store.

This bracelet has texture and depth.

You can find our silver band ring 'Vision' by Dario Alejandro Vela in jewelry categories such as Modern Rings, No Stone Rings, Silver Rings, Fine Silver Rings and Band Rings. Enjoy exploring these sections for other Novica treasures.

Dario Alejandro Vela has received 5 microcredit loans with 0% interest from Kiva and Novica, the first for $200 and the most recent for $200. Proceeds were used to purchase larger quantities of silver to increase production.

"Beauty can be expressed in different forms and manners."

Dario Alejandro Vela Romero was born July 16 in the province of Callao. His beginnings in the world of jewelry came about in a casual way, although he always says that "life is a succession of casual happenings that guide us toward our purpose." When he was 15, a friend's father convinced him to help out in his jewelry workshop during school vacations.

At the beginning, Vela thought he wasn't cut out for this kind of work but, once vacations ended, he continued working there part time. Little by little, this activity became a passion. He realized how much he enjoyed working with meticulous details and eventually found a great deal of satisfaction in creating jewelry that people liked. Training courses complemented his experience in the workshop.

"Beauty can be expressed in different forms and manners," he says. This is the inspiration for his designs. And this point of view has permitted him to develop a style of his own through which he expresses his uniqueness.

"The challenge for a country like Peru is to get ahead little by little, despite the many difficult circumstances that exist. It's important that people appreciate the art of jewelry, as many don't value the effort it requires," he says. "Through Novica, people around the world can share my expressions of beauty."
View all