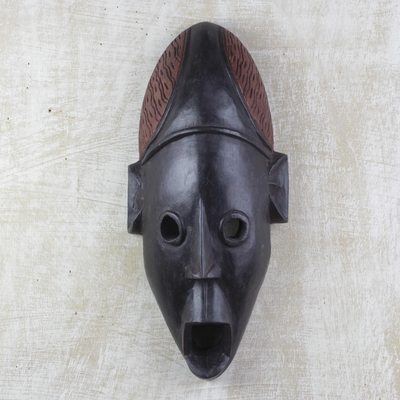 (8)
Round eyes suggest surprise, as a personage opens his mouth in amazement. Named... more

Round eyes suggest surprise, as a personage opens his mouth in amazement. Named Oblong in the Akan language, such masks are characterized by a long, narrow face. Carved by hand, this beautiful personage shows hair drawn up in a smooth triangular headdress. Skilled artisans working with Nana Adu Amankwapam I sculpts the piece from sese wood; mansion polish adds the rich color.

"Nice addition to other wall hangings"

Nice, well-crafted mask with simple, clean lines/design for our entryway.

Grabs your attention. Small yet bold! Makes a powerful statement!

"Love the meaning of tis mask!"

Love the story behind this beautiful mask. Hanging to the left of my front door, it makes me think of the wooded area directly across the street. Beautiful piece!

"Great Addition To Your Collection!"

The intricate details of this fine piece speak to the expertise of the artisans spot on interpretation of what this unique carving should be represented as, an executioner. The attention to detail and skillful craftsmanship of the mask transports the viewer of this work into a duality of thought and feeling. On the one hand, being on the edge of fear, knowing what the work represents, but at the same time being caught up in the beauty of the presentation of the piece. This mask is a true work of art and is a most welcome addition to my collection.

This is such a quality mask. The wood is much nicer than what I generally see on wooden wall masks. This mask is truly great and it has a polished, almost furniture quality about it ! Quite nice, and I am very pleased. I purchased this mask a while ago (years in fact) and I love it just as much now as I did when I first unwrapped it !

Tags By Mary B.

You can find our akan wood mask 'Oblong Face' by Nana Adu Amankwapam I in masks categories such as Wood Masks. Enjoy exploring these sections for other Novica treasures.

Nana Adu Amankwapam I has received 3 microcredit loans with 0% interest from Kiva and Novica, the first for $800 and the most recent for $200.

On December 15, 1991 after the necessary rites had been performed by the elders, Tetebo was seated as the Tufohene with the royal name of Nana Adu Amankwapam I.

In 1991, Adu Tetebo was selected by the Kingmakers as the next occupant of the Tufohene throne to succeed the late Nana Kwadwo Owusu. Tufohene is an Akan word for a person who counsels the chief. On December 15, 1991 after the necessary rites had been performed by the elders, Tetebo was seated as the Tufohene with the royal name of Nana Adu Amankwapam I.

Born into the Asona royal family on January 5, 1949, Amankwapam received his General School Certificate in 1970. Between 1970 and 1973, he read for a degree in accounting and today is a fellow of the Institute of Administrative Accountants and a member of the Institute of Accounting Technicians.

Amankwapam's forcefulness and leadership qualities have made him the inspiration of young and old. It has been his vision that the unemployed be trained and aided to improve their standard of living; he set up training workshops for youth in handicraft production. This includes carving, making and collecting beads, weaving Adinkra cloth and crafting cane furniture, mainly for the export market. He aspires to open two more such workshops so that Ghana's rich handicraft tradition can be shown to the world.
View all