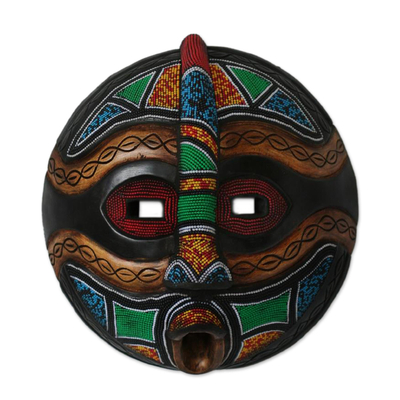 (7)
Colorful and regal, this mask is worn by the Yendi king during the fire... more

Colorful and regal, this mask is worn by the Yendi king during the fire festival. "As soon as he puts it on, the people bow down in reverence to his authority," says Abdul Karim Star of this lavish Ghanaian mask. He carves it by hand of sese wood and decorates it with colorful recycled glass beads.

This colorful mask looks beautiful next to the others I have. It is a little heavier than I expected, but it is made to be displayed. It is worth the money. The leather on the back (used for hanging it) was off center but the weight of the mask makes it firmly stay in the position you put it in on the wall, so it was not a problem. Thanks for your hard work in making it, Abdul Karim Star!

"A wonderful addition to my sister s collection"

She would be the first one to admit to her good fortune. Perhaps the mask works some magic too ;)

"Great addition to my African artifacts"

This box is exquisite! The craftsmanship is superb and I honestly believe it has a soul. I consider it to be among my favorite art pieces and I love it. At the moment I have a cloth with drops of cypress oil tucked inside for the leather to take on its exotic scent. I havent decided what to keep in it yet, but it will be something I use every day so I can touch it and feel it on a regular basis. I am so happy to have it!

Dear Mr. Star, Thank you so much for your African Women relief panel. The detailed carving of the women working and talking is unique, magnificent and tells a beautiful story. Your relief has captured an enchanting way of life in Ghana and your artistry is very impressive. Thank you once again â€“ Iâ€™m thrilled to own this piece of art!

You can find our ghanaian wood mask 'King's Mask' by Abdul Karim Star in masks categories such as Ghanaian Masks and Wood Masks. Enjoy exploring these sections for other Novica treasures.

Abdul Karim Star has received 3 microcredit loans with 0% interest from Kiva and Novica, the first for $750 and the most recent for $500. Proceeds were used to stock up on wood, metal plates, polish and paint to continue production.

"I was accused of smuggling museum pieces [and] detained… until inspectors… went to the workshop… They realized I had made the pieces…."

"My name is Abdul Karim Star, and I was born in the northern region of Ghana in 1966. Unfortunately, when I was four years old my parents divorced and my father decided to send me to Accra. I stayed with my uncle, called Mahama Wamzah who performed ritual circumcisions as well as being a beautician. Initially, I stayed with my uncle roaming the streets of Ayalolo until, one day, my uncle sent me to the Ayalolo Timber market school in 1973 where I begun my education.

"During my eighth year with my uncle, I realized that schooling was becoming difficult for me, both financially and intellectually. I often had to stay home from school because my uncle could not afford the tuition. During one of these long absences from school, I made the decision to help my uncle by looking for a job. One morning, while walking aimlessly around our neighborhood, a man I later got to know as Mustapha, called out to me and asked me to buy him food and some wood sanding discs for his job. When I returned, he wanted to pay for my services. I politely and humbly declined the gift, but on his insistence, I accepted a plate of cooked rice and beans. His show of love and appreciation endeared him to me, to the extent that I became his errand boy. With time, a friendship developed and I became fascinated with his craft – he was a wood carver.

"I regarded Mustapha as a very interesting man and believed this transcended into his art. I eventually joined his group of trainees, which required leaving my uncle's house when I was 18 years old. Mustapha trained us well in every area of the woodcarving realm and eventually I became a carver in my own right, working for Mustapha.

"I was soon selling my own pieces and had established an appreciative clientele, but competition was tough. Two of my competitors framed me on route to Nigeria and I was accused of smuggling museum pieces. I was detained for six hours, until inspectors sent by the Ghanaian Consulate went to the workshop and saw myriad objects at various stages of completion. They realized I had made the pieces and I was released. This experience made more determined to pursue and establish other venues through which to sell our wares. Luck began to smile on me and my clientele grew, both nationally and internationally. It gave me the opportunity to exhibit my work in Nigeria, Burkina Faso, Togo, Mali and the Ivory Coast.

"When I start to work on a piece, I become more creative and it feels as if I am in a different world where the personal challenges I have no longer exist. I have realized that my imagination goes wild.

"I get the ideas for the items I carve by focusing my eyes on a plain surface for a period of time and I begin to see images of designs. I quickly sketch these designs and make time to try out the designs I have sketched. I work with leather, recycled glass beads and sese wood. I have recently started crafting leather jewelry boxes.

"My dream for the future is to establish an art academy to train people to continue in the carve items as well as African culture. I have trained about 30 people since I started working on my own in 1984. But then I hope to train hundreds of people if this dream comes true.

"Now I train apprentices. My work has enabled me to support my parents, my brother and sisters."
View all