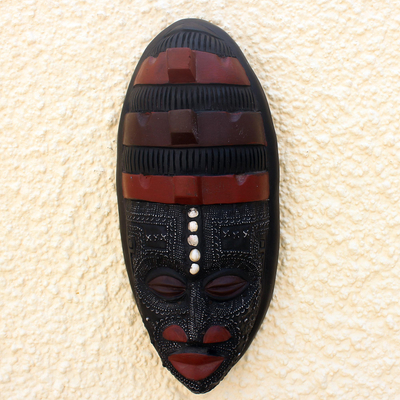 Carved by hand from African sese wood, this handsome mask exhibits an exquisite equilibrium of form and size. The rich textures of aluminum repoussé enhance its beauty, while beach pebbles center the forehead. Otchere Raymond delves into his creative imagination to create the mask. He names it Nhyira which means "Blessing" in the Akan language.

As a dinosaur lover,

I really like this mask, wonderfully carved by a highly skilled artist!

The paint, carving and the aluminium work on this mask really adds decor to any wall its placed on. Very good attention to detail. Easily a favourite in my collection. Its sure to get some admiring looks.!!

You can find our ghanaian wood mask 'Akan Blessing' by Otchere Raymond in masks categories such as Ghanaian Masks and Wood Masks. Enjoy exploring these sections for other Novica treasures.

He has ten children under the ages of ten that he loves deeply and cares for.

Otchere Raymond has received 5 microcredit loans with 0% interest from Kiva and Novica, the first for $100 and the most recent for $300. Proceeds were used to invest in the purchase of such raw materials as wood, aluminum plate, polish, paints and dyes.

"This skill of carving has been passed on for generations in my family. I was trained under the supervision of my father who was also a master carver and very well known in our region."

"My name is Raymond Otchere, and I have been with this company called NOVICA for 20 years.

"I joined NOVICA initially as part of a group (with my brothers) until I later became a sole artisan. I am extremely skilled at what I do, therefore I had no issue with either my new products or replenishment.

"My main success that I can speak of is providing for my children with my sales from NOVICA. My children have had the best of educations, thanks to Novica. I have three children, and some of them are handling their own businesses and so on.

"As a way of passing down my skill, I have trained more than four artisans. All four of the artisans are doing well and now have their own shops. I have expanded greatly in scale. Now I have my own shop, and my goal is to create more unique items for both my shop and NOVICA."

"I am a master woodcarver and create masks, profiles, figures and drums, among other crafts. My workshop is located in the hills of Aburi, a leafy and vibrant town in the Eastern Region of Ghana. This skill of carving has been passed on for generations in my family. I was trained under the supervision of my father who was also a master carver and very well known in our region.

"I have been a carver since I was almost 30, and this art has sustained my family for most of my life. Like my father, I am a respected craftsmen in my town and have taught a lot of young men over the years. Currently, I work with two apprentices who are happy to learn under my tutelage. My inspiration for designing and producing comes from within and from the beautiful things of nature that surround me.

"I am a family man with three children – two girls and a boy, and I hope to pass the skill on to my son someday just like my father did. I believe that my son should learn the skill even if he does not pursue it as a career, in order to pass the heritage on for generations to come."
View all