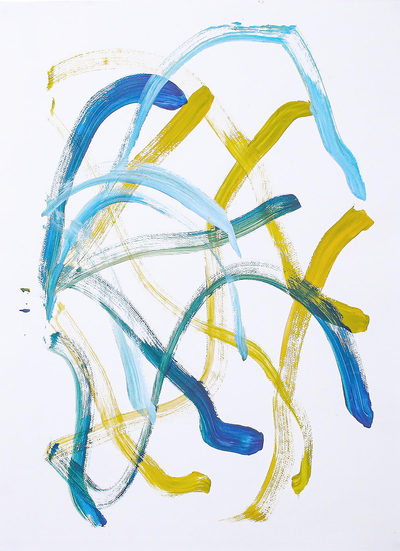 Evoking coral in sun-kissed waters, playful strokes of blue and yellow arc across the page in sweeping curves. Young and playful, Bai-tong paints an exuberant composition that is cheerful and beautiful.

The reverse side of this original painting features the Elephant Conservation Center's seal of authenticity, as well as Bai-Tong's biographical information. It arrives unframed.

You can find our elephant painting 'Smooth Coral' by Bai-Tong in paintings categories such as Elephant Art Paintings and Acrylic Paintings. Enjoy exploring these sections for other Novica treasures.

Bai-tong is the youngest student in the elephant training school. She enjoys painting so much that she sometimes takes a firm grip on the paintbrush and refuses to return it to the trainer.

Bai-tong is a friendly little female who gets along well with people. When she arrived at the Thai Elephant Conservation Center-TECC on June 9, 2010, she was only about a year old. She had been given to the Department of National Parks, Wildlife and Plant Conservation because she needed special care to stay healthy.

After a thorough checkup by veterinarians, she met the mahout who would care for her and train her. He had to stay close to the little calf day and night. Despite her young age, she follows his orders very well.

Today she is the youngest student in the TECC elephant training school. Each morning, the pachyderms line up according to age, so she is the last in line. With her trunk, she grasps the tail of the elephant ahead of her and they all parade to the show field, to the delight of visitors to the center.

When she is in a good mood, she will shake her head and rock back and forth so the bell on her neck jingles. On chilly mornings, she gently tests the water with her foot or trunk, refusing to take a shower if the water is very cold. Her mahout must then bring her water in buckets to bathe. After her shower, she races home for breakfast. The intelligent little elephant has a preference for corn.

Bai-tong enjoys painting so much that she sometimes takes a firm grip on the paintbrush and refuses to return it to the trainer. She is much loved by the TECC staff and every tourist who has seen her.

In 2002, Novica offered to assist Richard Lair by featuring the Asian elephants' paintings online, making them more accessible to the general public. Since then, a new wave of media attention has again focused on the plight of the Asian elephant, and thousand more people have purchased paintings — helping raise considerable funds for the TECC in Thailand, and for a separate rescue center in Bali.