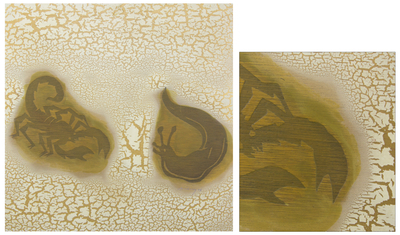 Beto Araluce explores duality with this cryptic abstract. "Duality has always existed in nature. On one side, the scorpion and on the other a noble snail," he says. "One cannot exist without the other – the forces of nature as complements and in opposition. These are metaphoric forms of light and darkness. Neither exists without the other." Araluce creates the pyro-engravings on wood and applies paint with a crackled finish.

"Painting is a life-long journey. Time and experience are invaluable."

"In 1980, I received a master's degree in architecture at the prestigious ITESO university and in 1992, an M.F.A. from the New York Academy of Arts. But I started to paint long before I studied architecture. My first exposure to paint was in 1973 as an exchange student living in Islip, Long Island. It was Willem de Kooning who did it! Ever since I saw his work, I wanted to become an artist."

The Landscape of my Mind

"Although I was once an artist dedicated to paintings (surfaces unified by the oil pigments), I now avail myself of any technique (cements, resins, wax, sand, dirt), objects, materials, procedures or ideas I deem necessary to accomplish my artistic goal. Most prominent is the incorporation of sand and springs, and the use of fire and time for burning, oxidizing, and smoking. My works range from extreme visual complexity – in particular those relating to sedimentation strata, archaeology, etc. – to extreme simplicity, in particular the most recent materic ones.

"My working method is constructive and subtractive, generating spaces rather than dividing them. The result is so touchable that it appeals to the senses and draws upon one's connection to the earth through the body.

"In my recent works, I realized that the expression of art arises from feelings or sensations, and that the profundity of life provides the wisdom. That I can demonstrate my life experience, inner feelings, and culture much more clearly and completely in painting than through language. The form of my inner being, the pulsation, and the passion are far better expressed with paint, than any attempt to do so with words.

"Thus I can speak louder and clearer the things that I have seen with my heart and soul.

"My work is my life, thought, and emotion. Its content is absolute, natural, internally existent and emotional. I sincerely hope that the viewer may, through this visual sensation, turn to his inner feelings and communicate together with me one thought concept and understanding of art in common."

The Influence of Abstract Expressionism

"Another area in which abstract expressionism has had an impact on my work is to be found in the so called 'non precious attitude toward work.' This is contrary to the philosophy of figurative art learned at the academy I attended. It took me almost five years to delete all the yet-valuable knowledge infused on my painting ways. Then, humble as a Zen monk, I had to start to relearn new ways, take away the fear of limitations. Now my willingness and innovative painting methods drive me to paint on the composition until 'I can't do anything more.' This is reflected in the complex multilayer structures of my canvases.

"The serious viewer will agree that there seems to be more than that which meets the eye – an idea about art, nature, the origins of existence, waiting to be discovered as the images make themselves known to you.

In addition, Araluce is a well known teacher. He was a professor in the I.T.T.E.S.O. School of Architecture and has offered a number of workshops in Mexico as well as in the Dominican Republic. His own studies took him to Paris in 1982 and to the New York Academy of Figurate Art in 1991.