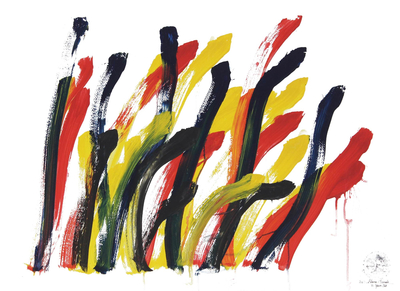 Please note: The elephants hold the paintbrush carefully, by the tip of their trunk – which is also the elephants' delicate nose area. Slight smudging, and an occasional water droplet, here and there, are to be expected on most elephant paintings. We like to consider that these imperfections add to the conversation value of each piece.

Amazing piece of Art from an Elephant. In my opinion even contemporary artists would not have done better.

You can find our elephant painting 'Yellow Daisies' by Aleena in paintings categories such as Abstract Paintings, Elephant Art Paintings and Acrylic Paintings. Enjoy exploring these sections for other Novica treasures.

Aleena's nickname is May and she weighs 3,329 pounds. The young pachyderm is very friendly. She is practicing to play in the elephant orchestra, however she is already a skilled painter.

Aleena was born on May 6, 2004. Her father is Phra-may and her mother is Poomphaung, another Novica-featured elephant artist. Aleena's nickname is May and she weighs 3,329 pounds. The young pachyderm is very friendly. She is practicing to play in the elephant orchestra, however she is already a skilled painter.

Aleena is one of the three elephants – Aleena, Prathida and Wanalee – under the patronage of Her Royal Highness Princess Galyani Vadhana Kromluang Naradhivas Rajanakarin. Her Royal Highness shows great kindness to animals and has raised many pets in the palace. The princess was born in the zodiac year of the pig, but in Northern Thailand, the symbol for this zodiac sign is an elephant, which is also a symbol for the king. This is why the princess has chosen to sponsor elephants. All three "royal" elephants are female and all are artists.