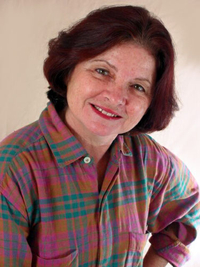 "I have researched a lot about African and indigenous cultures. I create based upon [my research], rehashing and recovering native arts."

"I am a psychologist and an artist. In 1987, when I had already established a life for myself in psychology, I decided to put into practice my dormant talents and began taking classes in painting and watercolor at the Parque Lage School of Visual Arts. It was a funny transition; at first people thought I had decided suddenly to become an artist, and they ignored that I had a latent creativity. Later, they began to know me better as an artist than as a psychologist, since art ended up exposing me to others much more than psychology.

"I began to diversify my production, painting textiles and silk, among other things. Today, I continue to paint and create pieces for decoration and costume, like the papier-mache masks and costume jewelry.

"I have always had a great interest in masks. I have researched a lot about African and indigenous cultures, and I have even researched Australian aborigines. I create based upon the information that I have amassed, rehashing and recovering fundamental native arts. The painting of faces and bodies used by these different people around the world is very visually sophisticated, making it quite fascinating.

"My creative process is rather chaotic; I often end up working on many different pieces at once, combining the work of watercolors, masks, necklaces, and more into one sitting. My favorite artists, from whom I derive creative influence, are Joahn Mitchel, Baselitz, Cytombly, Iberê Camargo and Jorginho Guinle.

"I think the hardest part of being an artist in Brazil is having to produce and sell one's own work. It is also necessary to be well connected so as not to be an illustrious nobody. Over the past two years the market in Rio de Janeiro has improved significantly as a result of art circuits organized by the artists themselves, making possible greater media visibility.

"Novica, for me, is something that fell from heaven. It is wonderful to be able just to create and to leave the selling to the website. I hope that ours will be an excellent partnership."