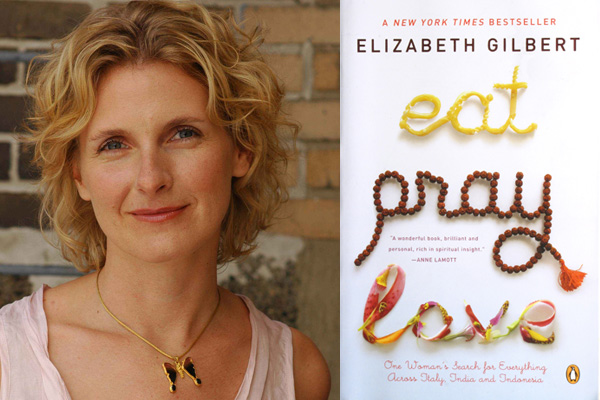 NOVICA co-founder Armenia Nercessian has been featured as a character in the New York Times bestseller “Eat Pray Love” by Elizabeth Gilbert. Armenia met Elizabeth while she was on a sourcing trip to Bali, and the two became close friends.

Below is an extract from the book, where Armenia’s character is introduced… (pages 264-265)

At this moment, a great-looking woman came walking into the shop, smiling like a lighthouse beam.  Tutti leapt up and ran into her arms, shouting, “Armenia! Armenia! Armenia!”  Which, as it turned out, was the woman’s name–not some kind of strange nationalist battle cry.  I introduced myself to Armenia, and she told me she was from Brazil.  She was so dynamic, this woman–so Brazilian.  She was gorgeous, elegantly dressed, charismatic and engaging and indeterminate in age, just insistently  sexy.

Armenia, too, is a friend of Wayan’s, comes to the shop frequently for lunch and for various traditional medical and beauty treatments.  She sat down and talked with us for about an hour, joining our gossiping, girlish little circle.  She’s in Bali for only another week before she has to fly off to Africa, or maybe it’s back to Thailand, to take care of her business.  This Armenia woman, it turns out, has had just the teensiest bit of glamorous life.  She used to work for the United Nations High Commissioner on Refugees.  Back in the 1980’s she had been sent into the El Salvadoran and Nicaraguan jungles during the height of war as a negotiator of peace, using her beauty and charm and wits to get all the generals and rebels to calm down and listen to reason.  (Hello, pretty power!) Now she runs a multinational marketing business called Novica, which supports indigenous artist all over the world be selling their products on the Internet.  She speaks about seven or eight languages.  She’s got the most fabulous pair of shoes I’ve seen since Rome.

Looking at us both, Wayan said, “Liz–why do you never try to look sexy, like Armenia?  You such a pretty girl, you have a good capital of nice face, nice body, nice smile.  But always you wear this same broken T-shirt, same broken jeans.  Don’t you want to be sexy, like her?”

“How is it different?”

“Armenia,” I said, turning to my new friend.  “Can you please try to explain to Wayan what it means to be a Brazilian woman?”

Armenia laughed, but then seemed to consider the question seriously and answered, “Well, I always tried to look nice and be feminine even in the war zones and refugee camps of Central America.  Even in the worst tragedies and crisis, there’s no reason to add to everyone’s misery by looking miserable yourself.  That’s my philosophy.  This is why I always wore makeup and jewelry into the jungle–nothing too extravagant, but maybe just a nice gold bracelet and some earrings, a little lipstick, good perfume.  Just enough to show that I still had my self-respect.”