Alejandro Chavez began learning the art of Ayacuchan retablos, or dioramas, at a very young age. But a war forced him to awaken from his dream of art. Two groups confronted each other — the terrorist group Sendero Luminoso, or “Shining Path,” who recruited and threatened the rural farmers, and the Peruvian army, who arrested or gunned down anyone who looked suspicious. He fled from the massacre and moved to Lima, where he found peace once more through his retablos. Can art heal a wound? 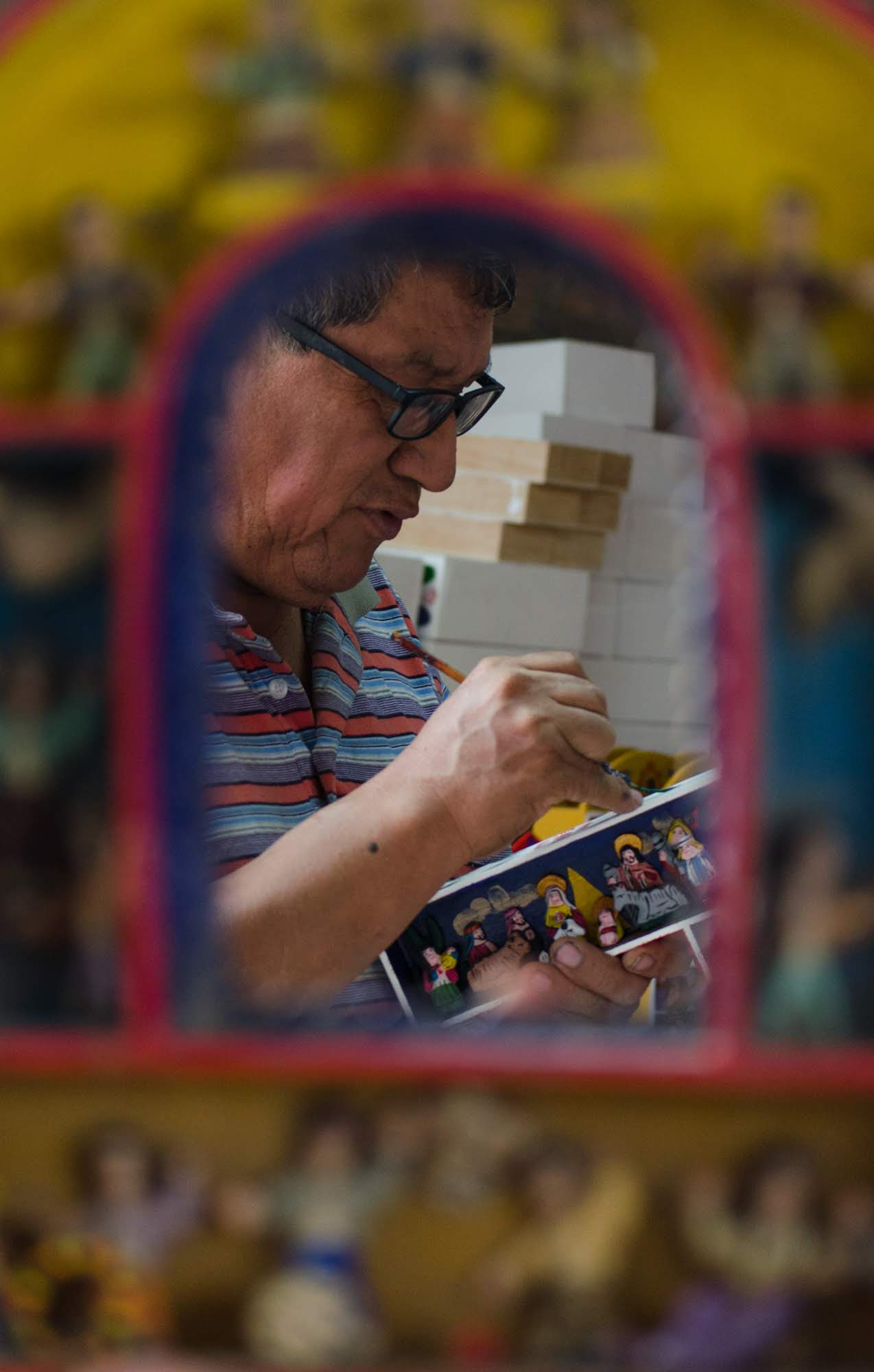 “The soldiers began invading our homes in the town of Quinua, abusing our women and jailed our people unfairly and arbitrarily. When this happened, I realized I was in the middle of a bloody war between two combat forces.

“On one side was the Sendero Luminoso that burst into our peaceful homes to recruit young people and children through kidnapping and threats. On the other were the soldiers and Federal Police Special Forces who unjustly imprisoned my cousins, aunts, uncles, and friends. If we sided with the Army, the “Reds” (Sendero Luminoso) killed us for being informants. If we sided with the Reds, the soldiers would come and kill us by night, accusing us of being accomplices. No matter who was winning, we — the country people — always lost.

“The 1980s were the most painful for my family and my people. All Peru was bleeding because of this armed conflict. I lost several of my friends. Some died, others were jailed even when they didn’t know how to read or write. Because of the war, I had to drop out of school and the artisan workshops I loved in nearby Huamanga. I acquired a bit of knowledge in the retablo arts. But I dropped out because it was no longer safe to leave the house. The fear we felt was greater at night. Sometimes, with a group of friends, we’d hide in the woods. We built small camps using leaves and branches, always taking care that neither the Senderistas nor the Army would find us.

“We lived like that for several years. By the time I was 17, the terrorism had reached its peak. I had to fight for my life. With pain in my heart, I left my town and headed to the capital where my parents lived. I went with only the clothes on my back and nothing in my pockets. I walked for days in the mountains and traveled for hours by bus to reach Lima. 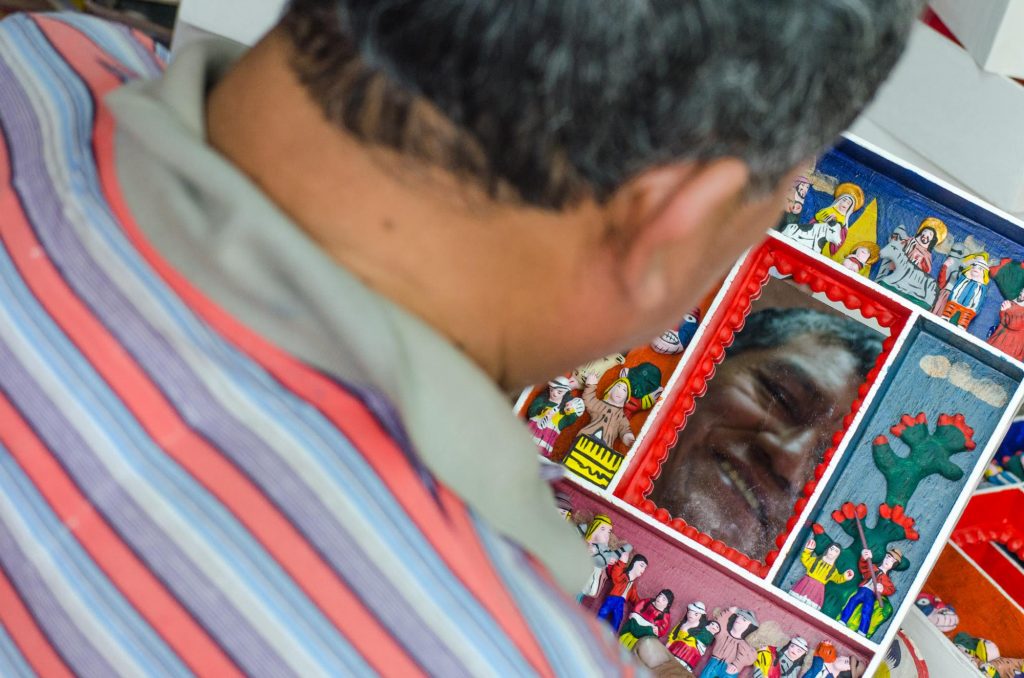 “When I left home, the violence in Ayacucho continued. Sendero had ruined the tranquility of Quinua, a tourist town and cradle of great ceramic artists. My parents told me I was born on the way from Ayacucho to Lima. But I consider myself 100 percent Ayacuchan because I grew up in the countryside. That’s why it hurt so much to leave my home, my livestock and my grandparents.

“In Lima, everything was different. I was accustomed to the tranquility of the countryside and that didn’t exist in the city. The fiestas and folklore of my village, like the yunzas, and the Dance of the Scissors, weren’t celebrated here. To keep from being bored, I worked at different jobs. People like me who had just arrived began working as stevedores in the fishing port. After that, I sold fruit from a stall in the market.

“Then one day, my cousin convinced me to try my luck in an Ayacuchan art workshop. When I visited it, my eyes were shining at the sight of all the beautiful retablos.

“So I returned to my roots. Over the years, I perfected my skills and became a master of the retablo. In some examples, I depict religious themes and in others, the everyday scenes of the Andes. I did this for eight years. It was exhausting. I had to craft my retablos but that wasn’t enough. I also had to transport them to the artisan fairs and sell them door-to-door to shops in the city.

“In the same way, with my wife of 35 years, we’ve faced very difficult situations that we’ve successfully overcome. Our main problem was that we were unable to conceive a child. We tried various fertility methods but stopped them for the sake of my wife’s health. Finally, we decided to adopt. In our search, we met a seven-year-old girl and a three-year-old boy, whom we raised with all our love as though they were our own flesh and blood. The girl stayed with us while the boy went to live with my mother in Ayacucho. 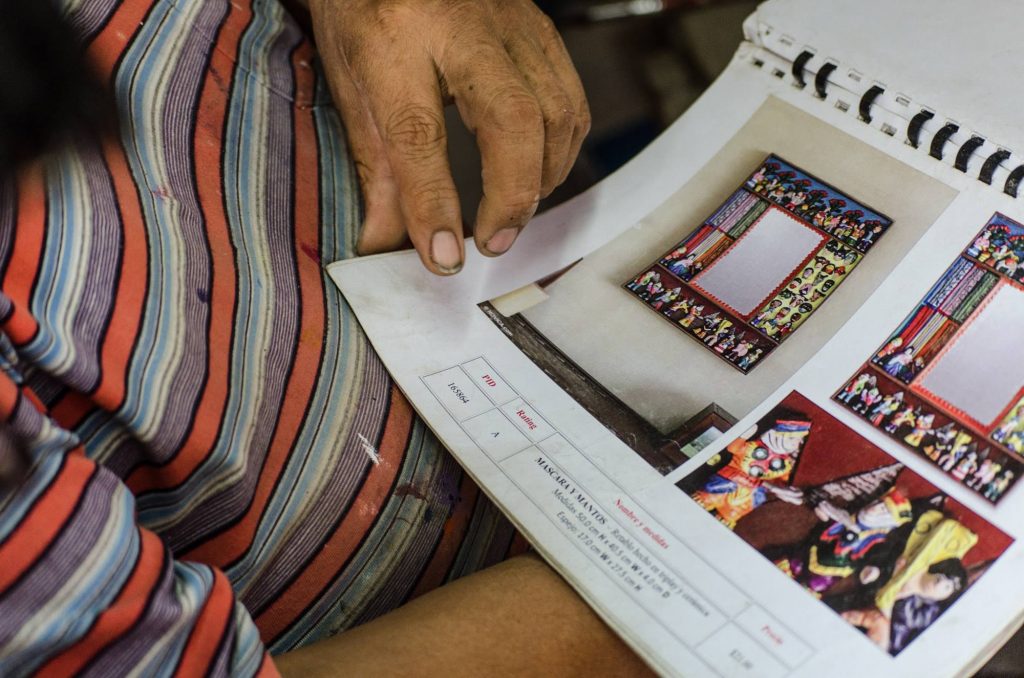 “The wound in my heart from the years of terror in the 1980s began to heal after I met NOVICA in 2007. NOVICA showed me I can make a living with my art. They gave me back the hope of getting ahead. Thanks to the income from the sale of my work, I’m able to give my family a better life and, above all, help my daughter Carol go back to her studies in accounting even though she’s now a young mother. Since then, everything has gone well. 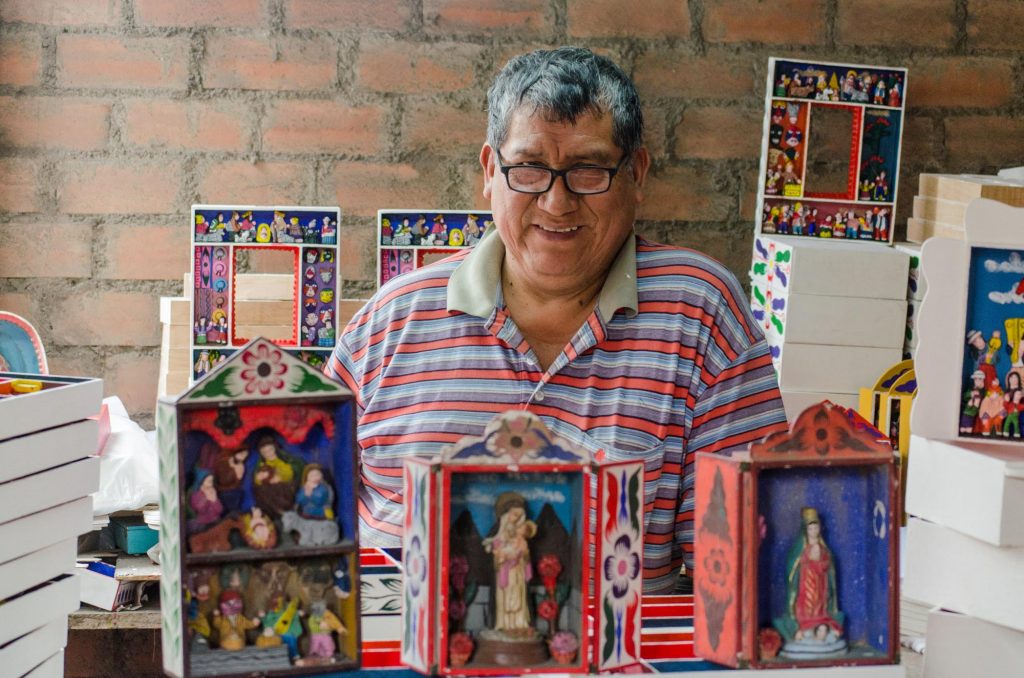 “Today, at the age of 50, I can say that my pain has healed. I’ve spent years sharing the culture and traditions of my people through my retablos. At this stage of my life, I think the best way to go out is with a great art exhibit where I can show my most representative work.” 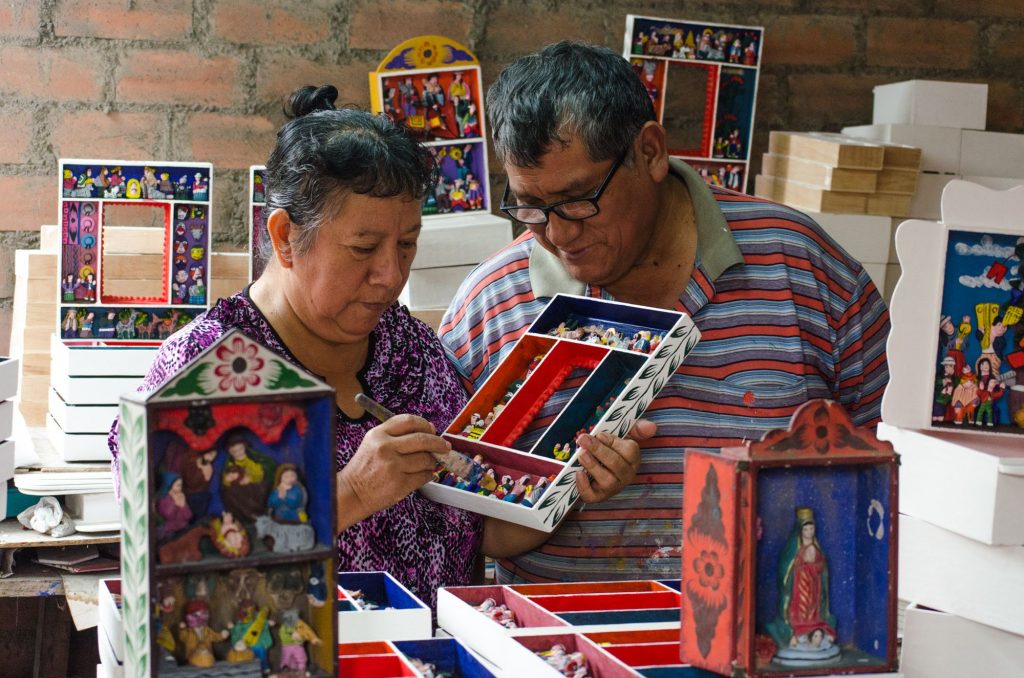 This interview took place in the home-workshop of Alejandro Chavez in Callao, Peru on May 22, 2018.