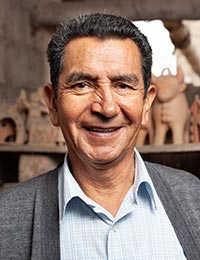 Ceramic figurines and candleholders in The Andes

Dionisio Rojas Gutierrez has worked for many years - since the age of ten - as a ceramic artist, winning many art contests at local, state, and national levels.

The artistry of Dionisio Rojas Gutierrez has been featured in the Cincinnati Inquirer.

Dionisio Rojas Gutierrez is an artisan from the Andes mountains of southern Peru. He has worked since the age of ten with his cousins, who are also ceramics artists, and his aunt who had an art store in his hometown. Rojas sold his ceramic artwork locally as a teenager and won art contests at local, state, and national levels as his skills progressed. Alongside his lovely wife, he fully dedicates himself to his ceramic artwork, in particular churches, lamps, animals, and musicians.

He forms the vases on the potter's wheel, while figurines are shaped by hand or in a hand-made mold. The pieces are fired it at a temperature of 900º C (1,652º F). When they have cooled, Rojas paints the motifs and protects each piece with a coat of varnish.

Just as nice as the photo. Arrived well packed. Thank you NOVICA for another wondeful connection to Peruvian arts!

"will enjoy for years"

lovely craftsmanship, i love the many, many characters, animals, angels, and special touches - a special piece for Christmastime

This piece is even more impressive when viewed in person. The scale adds to the piece and the craftsmanship. For lovers of Andean art and pottery, this is a must own!

This piece is spectacular. It is everything you said it was, and more. Definitely handmade, with meticulous attention to detail. Great value for the money. The only question I have is: you indicated in your description that the piece would be signed by the artist. I have looked all over the piece and failed to find any signature. That doesnt affect the quality of the piece, but I was looking forward to seeing his endorsement on the piece. Arrived sooner than expected, packed extremely well to prevent breakage. Very positive purchase.

I was drawn to this piece immediately because of its originality. Secondly it has several personal interpretations for me. The concept of the nativity cradled in a pair of hands is so spiritual and one I have never seen before. I have a large nativity collection from around the world and this one is exceptional. Each year after Christmas I pick one nativity to display all year long. This one will be it for 2017.