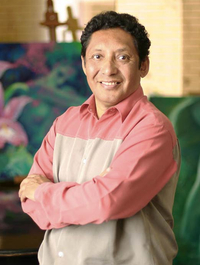 ”I believe it is God who has led me down this path and who inspires the themes I paint."

"Painting is something subjective because you give in to what you're feeling, that's why first I stain the canvas. Then, through the grace of God, I see what I want to depict. I'm not interested in painting a masterpiece; to me it's about the joy and the pleasure of painting. The simplification of forms and the beauty of the worlds' colors so the viewer may receive their energy.

"Though there are no artists in my family, I have always loved to paint, sketch and draw. When I was a kid I used to paint robots, animals, portraits and cars. One day I was playing with a ball when it landed in a neighbor's garden, and when I went to retrieve it I couldn't believe my eyes: there was a young woman painting with oils in front of an easel! I was impressed and urged my mother to enroll me in art classes. When time came to choose a university career, my parents didn't approve of my choice of studying fine arts. Instead they wanted me to become an architect, lawyer or economist.

I didn't want to study any of those so I went into the army instead and did little jobs on the side to contribute to the family's finances. My mother continued to try to get me to study something, so I enrolled in metal mechanics, for which I was very good because I could picture everything in 3D.

"One day I came home and said to mom, 'I have two things to tell you, one good and one bad. You'll have a son in university studying mechanical engineering, but he won't be able to continue working.'

"At university, a professor remarked on my work saying that I was excellent at drawing and painting, that it is my strong point, but not so maths. By coincidence, at that time a cousin asked to do the art work for a brochure as well as an ad for the TV company she created. I started freelancing for her and after a month I was given a contract and a good salary.

"So again I went home and said to mom, 'I have two things to tell you, one good and one bad. The good one? I gave her an envelope with my salary. The bad one? 'You no longer have a son in university.' I wanted to dedicate my life to what I want, what is really me, and that is painting.

"I learned a lot while I was working there, and then I moved to another company where I was made Art Director. I had to study graphic design online because everything was fast becoming technological.

"I had a successful career, and then I had some form of an epiphany when I went to Santa Cruz, in Bolivia, for a niece's christening. I had a mystical awaking after meditation and I wasn't the same again. I wasn't interested in the material world and embarked on a journey of self discovery. Eventually all I did was paint. I took a course on art classes for kids, and I specialized in art therapy, where I teach people how to unblock emotions through art and to enjoy the present, the only place where life and God exist.

"I believe it is God who has led me down this path and who inspires the themes I paint. I was working with NGOs feeding and teaching children to write, so the first theme I began to paint featured children.

"One day I met Apolonio Zevallos and he invited me to meet everyone at Novica. I was very pleased with the art work they featured, especially the portrayal of children. I see this as a good omen and that's how I came to decide to heed the call to join Novica."