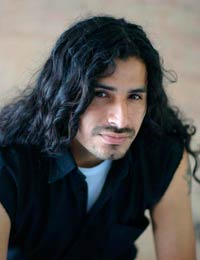 Recycled metal sculptures in The Andes

"I had to go with my friend to meet the owner of the truck for which those parts were originally intended, and explain to him they were now part of a sculpture."

"I'm Juan Miguel Mejía Caillahua, born June, 30, 1978 in Lima. I'm a self-taught and impassioned artist, satisfied with the wonderful artistry I carry in my hands. I was only a 13 year-old child when I began to make my own toys, especially gargoyles. I used to tear apart other toys and use their components to create my own versions. That's how I got into making sculptures, but this time recycling mechanical parts. At that time, I was also very much into music and played on my dad's guitar. I composed about 30 original tunes for my heavy metal band.

"There's a very funny anecdote that I never tire of telling. It so happens that one day, when I was working on the sculpture of a medieval knight, I realized I was missing some pieces so I went to a friend's auto-shop. He said I could take anything I needed from a metal box he had lying around. I was so happy picking up all sorts of things! It was like an oasis in the middle of a desert, and without thinking twice I ended up taking all. Three days later my friend came by and asked about some pieces he needed, which he had left outside the box. Needless to say, I had taken them, but they were already welded into the sculpture. I had to go with my friend to meet the owner of the truck for which those parts were originally intended, and explain to him they were now part of a sculpture. Rather than getting angry he was fascinated and bought it! He christened the sculpture, 'The Son of the Mercedes,' because those parts were intended for a Mercedes Benz.

"I enjoy listening to black metal music, which inspires me to create these original sculptures. My work shows my passion for all things metal, and I'm motivated by a desire to create a new generation of vanguard artistry with elements of realism.

"I have exhibited my work in several places and it makes me very proud to be able to transform even the smallest trinket into a magnificent sculpture.

"One of the greatest challenges I have faced was when I was 18 years old, studying the second semester in accounting. I wasn't able to prepare well for the finals because I was busy rehearsing, playing at concerts and leading a bohemian lifestyle with my band. I was close to failing so I had to work very hard and managed to save the course, which made me extremely happy.

"I would like to send Andean greetings to Novica clients. I would like to thank you for your company and support when you visit this virtual gallery featuring my sculptures. The fact that you can see them from your home fills me with the desire and energy to continue creating more art works."

My son does not normally like Knick knacks but his Dad was a reader as he himself is also ...his Dad passed away some years ago and this is a beautiful reminder of him and his love for reading so he will always cherish this handsomely made sculpture!

"Awesome gift for any age"

This was a gift for my 14year old son.He just loves it especially because he plays basketball on his school team and it represw ts thw sport he loves! He says hell never out grow it as he can put it on his desk as an adult.

The person who receive the gift is truly in love with it and friends. There's always discussions about it whenever they are together. They think it's truly unique and have never seen anything like it. The person also have google it and learned more about the website that sells it and about how it is made and the maker behind it. Novica you are best store I ever shop from everyone I shop for are always please with their gifts.

Looking for something romantic but not precious. I smile every time I look at this. Its romance with an edge.

As a dedicated tennis enthusiast, this unique tennis pro has a place on my desktop. A well-made, imaginative piece. Congratulations to the artist!

My wife and I love this piece. Simple but beautiful.