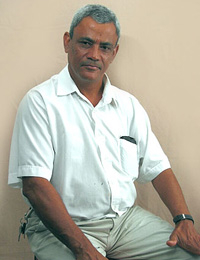 The artistry of Arnaldo de Moraes has been featured in Sunset magazine.

"I'm from Duque de Caixas, in Rio de Janeiro province. Since 1972 I've been totally dedicated to painting and thanks to God, I have enjoyed success and renown. Now my paintings have been sold to different parts of the world such as Europe, United States, and Mexico as well in Brazil's interior.

"My work has been included in a very important guide to Brazilian fine art: Guia de Artes Plásticas Brasil, compiled by Julio Louzada. I tend to depict Rio de Janeiro's urban landscapes – it is one of the most unique cities in the world where sea and mountains meet in harmonious encounter. Over the last 100 years the hillsides have become inhabited by low-income workers forming ghettos we call favelas. Considered to be marginal, favelas have gradually acquired more space and it is here where the real Carnival and samba take place. Favelas are part of the Brazilian scene, they are full of life and are forever present in the hillsides and city limits."

"I love this picture."

I am lucky enough to get to see this beautiful piece of art every day. I love it!

From near paris but i am from san francisco

this is a striking painting with presence. it is now framed with a gold frame which goes well with the richness of the colors.however it cost a fortune to frame! as i am 64 i like supporting this older master.